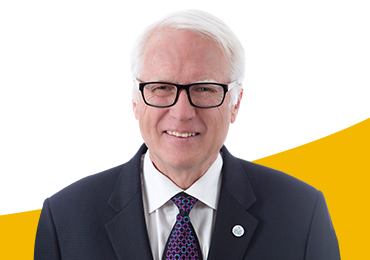 There is a great deal of pride when Brian Hanna describes O'Connor MacLeod Hanna LLP as THE law firm in the community. He has participated in its enviable growth for more than a decade and he knows why it is Halton Region's largest law firm - superb work provided by exceptional professionals. Brian has played a key role in developing the collegial culture at OMH where respected veterans happily share their expertise and experience with newer and often younger members of the legal team.

Brian's long and varied legal career began with a law degree from Queen's University. He was called to the Bar, with honours, in 1975. His experience since then has included Criminal Defence work, Family Law and time as a Federal Crown Prosecutor. But his true love is Real Estate law, which he has now practiced for more than three decades. As head of the O'Connor MacLeod Hanna Real Estate Practice, Brian has represented clients in more than twenty thousand transactions with dollar values ranging to seventy million dollars. Each client has received the same exceptional, caring level of service that Brian and OMH are known for.

Brian's commitment to his career is mirrored by his community service. He is presently the Chairman of the Board of Directors for the Oakville Community Foundation which administers over $110,000,000 in endowed funds for the benefit of Charities in the local community and throughout Canada. Numerous other boards and committees in our community have benefited from his expertise and experience as he has served as the President of the Halton County Law Association, president of the Oakville Lions Club, President of the Oakville Golf Club, and as a director of many other community organizations. This record of community involvement gives Brian enormous pride.

Outside of the practice of law, Brian Hanna's greatest source of pride comes from his family. The father of five is married to the well known and respected Oakville restaurateur Julia Hanna. Whether at 'Ritorno’ in Oakville - or at the dining room table at home - Brian resolutely affirms that "I'm the world's best fed man!"